We received a call just as we were about to leave home (7:10am). Read on to find out why.

We met at Macquarie Park picnic ground Windsor at 8:00am but was the last to arrive. Guess who got to write the report that you are now reading. Neil prayed for us and we left on time at 8:15am. The weather was cloudy, cold and drizzly light rain but cleared up.

Ron lead us up Wilberforce Road as Freemans Reach Road was closed for road works as part of the Windsor Bridge upgrade. We turned onto the Putty Road at Wilberforce and left into Kurmond Road. We came across a bunch of bike riders that we had to pass on Kurmond Road. At 8:40am turned right onto Bells Line Road and the rain had stopped. The Liney family had arranged to meet us at Warks Hill Road Kurrajong Heights but when they left home travelling in Laura’s car the fuel pipe seemed to be frozen and the car stopped suddenly. Eric had to go home and get his vehicle and towed the car back to their place. They decided to take the Forester vehicle and proceeded on their way but would be late meeting us. Phillip volunteered to wait for them just before the turnoff to Warks Hill Road. Little did Phillip know that he will be waiting for three more vehicles who missed the turnoff. The Liney family arrived about 5 minutes after the lost vehicles returned. At 9:52am proceeding on our trip travelling down Burralow track. Karate Kid led the lost and found vehicles to the picnic area. Along the way we passed a man and his dog, two vehicles, two women walking and two bike riders and we still haven’t reach the picnic area. Turning right onto Patterson Range Fire Trail going towards the picnic area for morning tea at 10:15am. We met the others as we entered the picnic and camping area on the left. At 11:10 we carried on with their rest of our trip, whilst leaving the campsite we were passed two motorbike riders and another two vehicles. Also, there was about 6 motorbike riders alongside the road repairing the tyre on one of the motorbikes. It was amazing to see so much green growth on the burnt trees after the bush fires, even the grasses were growing and beautiful and green. We passed the power lines, our morning tea spot on the recce and was soon at the Bells Line of Road. 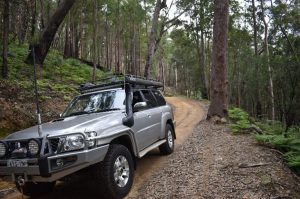 We turned left back onto the back top and a short distance down the road, turning right onto Mountain Lagoon Road. There was a stack of beehives on the righthand side of the road. I wonder what the honey tastes like?

We were back on the dirt again and travelling alone before Ron turned left into Sams Way. Sams Way circled the Mountain Lagoon lake. We were looking for some track that eluded us on the Recce. Will, on his motorbike, had turned left to checkout a track to see where it leads to. While we were waiting for Will to return, to our right was a perfect view of the Lagoon. At the end of Sams Way we turned left back onto Mountain Lagoon Trail and eventually reached Comleroy Road on the narrow track.

Ron turned left onto Comleroy Road and we were looking for the Gees Arm trails to show Shane (Gucrew). Off to the right is South Gees Arm Trail. As we are about to continue travels Will’s chain came off his bike, so we stopped to fix the chain. We all decided it was time for lunch off and set up in the open area just at the start of the Gees Arm South Trail. Ron announced that there was going to be a prize given to the person who collected the most rubbish. 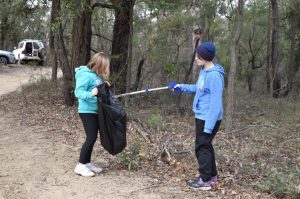 The Beatson’s children collected 2 large garbage bags filled with rubbish. At the end of the day, they received a packet of lollies for their hard work. Lunch finished at 2:00 o’clock and we continued our trip along Comleroy Road passing the Gees Arm North Trail on our right, before going down the hill to the Colo River. The entrance to Gees Arm North Trail had changed. The rocks across the track were removed and the gate was closed.

After passing the Anglican Church we came to the T intersection and turned right into Upper Colo Road then left into Colo Heights Road and told to stop on the bridge for a photo. 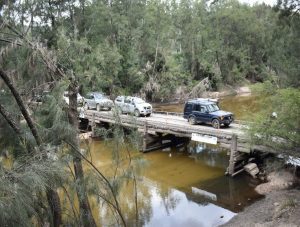 Didn’t anyone see the 15 Ton limit on the bridge. After a few pictures, we proceeded across the Upper Colo Bridge and into a clearing next to the river. The vehicles were aligned ready for another photo shoot. This time with passengers and drivers in front of their vehicles. Will was egged on to take his bike through a mud puddle and it didn’t take much for him to do it again. Some goats were spotted across the road from the clearing when we were turning right back onto the road. Colo Heights Road took us back the Putty Road. 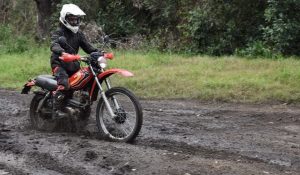 At the Putty Road, we turned right and then left Wheelbarrow Ridge Road. After some tar, the road turned to gravel just the way we like it. Matt pointed out that he saw a dog on a pile of mulch, and we were keen to spot the site. Well there was a dog on a pile of mulch checking out the vehicles as they passed by. We passed Wheelbarrow Ridge Trail on the left and our next stop were the aboriginal carvings on the rocks next to the road. You could make out the head arms and tail. Neil said there were more carvings, but they must have weathered away. Someone asked about using chalk to highlight the carving but told it a was a bad idea and sand was a better choice.

Down near Green Road the convey spotted a rainbow to the right which was quite spectacular, and Kylie reported that Isabel had seen a goat in a dog kennel. How unusual. You never know what you’re going to come across whilst travelling on the country roads.

We crossed the Hawkesbury River and turned left into West Portland Ferry Road to catch the ferry and waited to board. Paul, Norman And Olivia went back to Windsor instead catching the ferry with us.

The rest of the group was able to fit on the ferry. Once across the river we turned right and followed the river passing some of the river side ski parks.

We stopped for afternoon tea at about 3:30 on the corner of Sackville Ferry Road and Wisemans Ferry Rd, which gave Will an opportunity to place his bike on the back of his dad’s car, as we had experienced rain before we stopped. Ron handed out some prizes and Neil prayed thanks for a great day and a safe trip home. It was time to say our goodbyes and proceeded home after a very enjoyable trip. Thanks Ron. Some turned towards Windsor while others went to Old Northern Road.

See you on the tracks.
Phillip & Linda

Thanks to Kylie Beatson for photos in both trip reports Ed.