When the blackberries (almost) ate Bluey!

One man’s view
about the things
that really matter….

Stories that may
be strange, yet true,
from the Chaplain’s Travel Log….

Continuing the saga of ‘Bluey’ that we began last issue.

When the blackberries (almost) ate Bluey!

If only I had some pictures of this story! Pictures of Bluey, his old Morris car, and his shack. But sadly, these events occurred when I was only about 8 or 9 (that’s about 70 years ago now) and before I had a camera. Never mind, read on….

It was still winter in Blayney and therefore quite (read very) cold. Bluey was ‘out’ driving in his old Morris car and on his way to the village of Neville. The road that he was on was a reasonably good dirt road and was well graded. Bluey’s old Morris had, to put it mildly, seen better days and many ‘bits’ of it, like the foot brakes, no longer worked. That didn’t worry Bluey, because, as he told my Uncle for whom he was a casual worker, he would “jist ease on the handbrake’ when he wanted to slow down or stop. Bluey never let little inconveniences like brakes, get in the way of his travels!

Bluey Jones liked to smoke. He was a ‘roll your own’ man, and always carried his leather tobacco pouch around with him. He always said, like the swaggie in the later Slim Dusty song, “A man’s gotta have good ‘baccy’ when he smokes.” Good? All I can say is that the stuff he smoked smelt like a garbage fire at the local tip!

Well back to the story. As he drove along this day the road was deserted, no other vehicles and only the occasional rabbit on the roadside, Bluey felt like ‘avin a smoke’ and reached down to get his tobacco pouch out of his pocket and realizing that he was out of cigarette papers in the little compartment in the pouch, turned his head to look down onto the other seat where ‘he reckoned that he had some more, somewhere’. It was while that he was scrabbling around in the rubbish on the seat and looking for his cigarette papers that he failed to notice in time the sharp bend in the road and not having serviceable brakes failed to make the bend and ran off the road.

This was both a blessing and a real problem both for the car and for Bluey. A blessing because where he ran off the road was an enormous clump, patch, thicket call it what you will of blackberry bushes. This acted as a brake to stop him running into a very large lot of boulders at the other end of the blackberry thicket. It was a problem because these blackberry bushes were at least 5 metres high and about 9 -10 metres deep. The car went in and like a giant clam the blackberries totally enveloped the car.

I mean totally. Bluey was trapped. He couldn’t open the driver’s door more than a couple of inches (they had real measurements then!) Bluey had no means of cutting or hacking at the thick blackberry canes. He was trapped! But Bluey was nothing if not the world’s greatest optimist. “I’ll be orright” was his famous slogan. “someth’n or someone’ll come along”, besides the snakes that were reasonably prolific in that part of the country!

So, Bluey sat in the car and smoked. And smoked. And smoked. He smoked until he ran out of cigarette papers or matches or his beloved ‘baccy’. That’s when things started to get serious! No more matches and no more ‘baccy’! For a bloke like Bluey sitting still wasn’t his idea of a fun afternoon either. But he was trapped.

The sun was starting to get low in the sky when bluey heard the sound of a car coming along the road. The horn! It still worked and Bluey pushed against the horn button as if his life depended on it.

Then came a voice that he knew well. It was ‘the Boss’ as Bluey called him sometimes. My Uncle, Sam Marsden (his real name by the way) calling out “Bluey are you in there?”

“Ye-es Mr. Ma-arsden” (Bluey always extended the sounds of vowels in his words.) “I’m ‘ere, but I can’t quite git out” (Understatement of the year!) “Yer see I’m sorta stuck ‘n th’ door won’t open. Too many of these blanky blackies all aroun’ – jist about swallered me up. ‘n Mr. Maarsden, I’m bustin’, ‘n if I don’t git out soon….” The sentence remained unfinished.

“You’ll just have to …. Never mind Bluey. Look, I’m all dressed up from a meeting with the Pastures Protection Board, and I haven’t got any tools with me at all. You’ll just have to sit tight till I get home and I’ll send out my son Baeden with the tractor and scrub hooks to clear some of those blackberries, and some chain, to pull you out. Just …well hang on for a while…”

“Orright Mr. Maarsden” was the rather pained reply.

It was about an hour later and the sun was just setting when Bluey heard the sound of the old Fordson chugging along. Bluey at least had the presence of mind to switch on the lights to try to show where he was, but such was distance that he had travelled into the blackberries all that could be seen from the road was a faint red glow from the tail light through the leaves of the enormous ‘blackberry jungle’ that had closed around the little car.

Then the voice of the Boss’s son calling his name. The most welcome sound that he had ever heard.

The sentence remained unfinished as the young man shone a powerful torch around the bushes that had closed like a trap around the car and realised that it was impossible to get through the tangled mass of the huge, thick blackberry canes that had entirely enveloped the car.

“Well, you’ll just have to sit tight for a while longer Bluey, while I slash these bushes in order to get through to your car to put a chain around some part of the chassis so’s I can pull you out.”

“Please hurry” muttered Bluey. Bushman he was, and old clothes might have been his attire, but Bluey had his pride and wetting his trousers was just not on…. he hoped!

Slash, slash, slash. It took quite a few minutes for the young man to hack a way through the incredibly thick thorny undergrowth to reach the back of the car. The chain was looped around part of the chassis and attached to the tractor.
“Now Bluey”, came the voice, “When you hear the sound of the tractor engine begin to ‘rev-up’, then start your engine, put your car into reverse and try to assist. It’ll put less strain on your car’s chassis that way, after all it’s quite a slope to have to come up.”

The Tractor revved, the slack on the chain was taken up, and Bluey also started and let out the clutch on the old Morris.

With the Fordson pulling, even the blackberries knew that they had met their match and slowly the old car was released from its captor and came back onto the road. Bluey pulled on the old handbrake and kind of rolled out of the car and disappeared around to the front.

Baeden understood, and waited. In a couple of minutes Bluey reappeared with a very relieved look on his face.

“I dunno what was worse young Mr. Maarsden” he said slowly. “Runnin’ out of baccy or havin’ to ter sit in th’ car an’ not bein’ able t’ go…”

He made it home ‘orright’. But there’s a great lesson here which makes this a really important ‘CROSSTRAX’ message.
Imagine the scene if you can. An enormous out of control, clump of blackberries. I can vouch for it. The biggest that I had ever seen. A man trapped and unable to get out or to help himself. He was ‘orright’ for a while – or until his ‘baccy’ ran out. It was lonely road back then and if there had not been the marks on the edge of the road where the little Morris had skidded off and into the blackberries no one would have known where Bluey was and if the man needed help.

But by the greatest piece of good fortune (we really should call it ‘grace’) – ‘The Boss’ came by, saw the problem and knew what to do. He sent his son with the means to extricate the trapped man, and did it. Bluey was an incorrigible bloke, and didn’t deserve to be rescued, but he was rescued because ‘the Boss’ was like that – always ready to hear the cry of anyone who cried out “Have mercy on me I desperately need help and am totally unable to get myself out of the mess that I’ve landed myself in.”

God saw our need and sent his Son Jesus to save and get us out of our mess. That’s what Christmas, Good Friday, and Easter Day are all about. The thing is, have you recognised that eternal mess that you are in and accepted the offer of help or are you still trying to work out a way to extricate yourself? You will never do it. You need help from the Boss’ Son – Jesus.

In the New Testament we read that “at the right time, when we were powerless Christ came” …. And “died for the ungodly.” It was Jesus who said, “Come to me, all who are burdened down and I will refresh you, and … give you peace.”

What about it? Are stuck in the blackberries, the covid, the life with no joy or future? The Boss is never far away and hears our cry for help.

Next month: We conclude our Bluey trilogy with “When the Coppers got Bluey.” Don’t miss it! 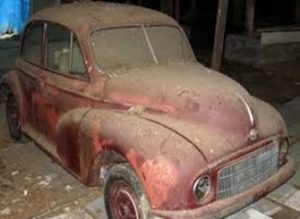