Taking the family out in the old Landy Wagon

Posted on September 1, 2020 by webmaster

It was September 1982, that’s exactly 38 years ago now, and I had taken the family out in the old Landy Wagon to the Coongie Lakes, in South Australia, just a little to the north and west of Innamincka. As usual, we had pulled about a kilometre off the track in order to find a nice quiet campsite away from the other vehicles that had decided to also come to this really great part of Australia. 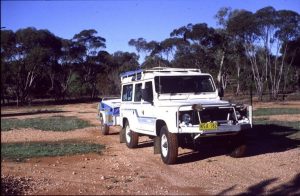 Anyway, the swags were laid out and the camp fire blazing well, evening meal was finished, and the kids were gathered round waiting for their nightly story from Dad. No moon, and a fairly thick cover of clouds hid the stars. It was dark, the sort of darkness that you rarely encounter in the bush since there is generally a fair bit of light in the sky even if there is no moon.

Story underway – it was one of my stories about a couple of aboriginal children who were great adventurers, and always getting into some exciting ‘scrapes’, but at the same time managing to come out of it successfully. (These stories were always ‘serials’, they began the first or second night out and only came to an end on the last night of the holiday.) On this night a crisis was just occurring to the children in the story, when a thin pencil beam of light pierced the darkness away to the east of where we were camped.

Odd. We were camped, so we thought, at a place where neither we nor our campfire could be seen from the track that led back into Innamincka. So, what could this light be and who was making it?

Slowly the answer unfolded. The light grew brighter and soon revealed that it was not one but two lights moving jerkily as they came nearer. Two headlights of an old Toyota SWB ‘Cruiser that was weaving around bushes and scrub and obviously headed towards us. The children were somewhat frightened by this but soon the vehicle had picked up our tyre tracks and was now heading straight at our camp and going faster as it got ever nearer until with a lurch it pulled up in the glow of our fire and a very shaky voice called out in words that seemed to tumble from out of him “Thank God we’ve found you, we’re lost! Hope you don’t mind, but we’ve been driving round for some time and we not only can’t find our camp, but now we don’t even know where we are, so when we saw the light from your camp fire we knew that there was someone alive nearby, and we headed for the light.” And with that, two very shaken and frightened young people in their early twenties almost burst from the Cruiser and wanted to shake my hand and stand by the fire.

It was a cold night and we were all rugged up even though we had been sitting around a good hot fire. The old cruiser had no heater and the young couple felt the cold more keenly because of their panic at being lost in the bush. They were cold, frightened and thoroughly dispirited. They had had enough. 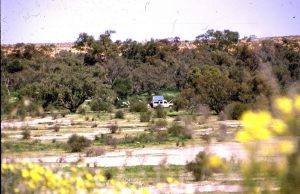 The invitation to come and sit by the fire and have a hot meal followed by a mug of tea and fire-toast did wonders by calming them down and putting them at ease. Soon they were able to begin telling their story.

Travelling without any real bush knowledge, inadequately equipped and totally inexperienced for that type of trip, they had set out to see ‘the Outback’. No maps except a general road map of S.A. that had been published by an oil company, and which did not show any tracks in that area, and, well, that was it! They had come to the ‘Coongie’s’ to camp and see the lakes but had decided to go back into Innamincka late in the afternoon to get some supplies. You can guess the rest – night falls, indistinct track, poor headlights, and a failure to recognise any landmarks so as to be able to find their campsite again in the dark. So, they had driven around and around following various tracks and all the time becoming more and more disoriented until with panic in their hearts they saw the light of the Flower’s campfire in the distance and decided to make a ‘beeline’ for it! Good thing they did because as it turned out, I had noticed a camp set up not far back from where we had originally turned in to cut across country to our particular spot, and was able to tell them how they would be able to navigate their way back. A look of calm and peace passed over the young couple’s face like I have seldom seen! No longer lost! A safe way back onto the right track and someone to guide them!

Stunned silence for a minute then a smile of sheer peace passed over the young bloke’s face. At that moment I couldn’t but help think of the obvious parallel in the teaching of Jesus when He declared that He was the ‘Light of the world’, and that ‘whoever followed Him would never walk in darkness.’

The problem with this fellow was that he didn’t have anyone to follow. What he needed was the ‘light on the hill’ (or on this case the light on the low sand ridge!) that could be seen from a distance away and that would draw him in his need to a place of safety and acceptance. He wanted to be found, to be assured, to be secured. At that moment it was not a nice new Landcruiser or Campervan that he wanted (although his ‘Cruiser did look a bit the worse for wear) – no, it was a sense of being found, being safe, being secure that was the thing that he wanted most of all at that time.

And there are many people like him and his girl who are literally ‘lost’ in this world. They have grown up with no directions for living; no knowledge of a God who loves them; no teaching about a Saviour who died for them and no hope for eternity. No wonder so many people are in a panic about life and where everything is heading.

But there is another dimension to this as well, because Jesus also said to His followers that “you are the light of the world, a city on a hill cannot be hidden”. People are lost and they don’t know where to turn to find hope. But Jesus had already thought that one through since He commanded His people to be so like Him that they would ‘stand out from the mob’ because of the light that they had found, and could therefore be used to help bring others to Him.

But hey, what about you? Are you ’in the dark’ about what I’ve been saying in this article? You don’t have to be! There is a light that is certain and available. And, it’s free! It has provided by Jesus because He cared enough to go out into the darkness of this world so that people can have a real sense of purpose and know that life is ‘going somewhere’. And, He wants to share it with you. Here’s how you can find it. (I recommend the ‘TRAX’ method because it is easy to follow and understand)

Think about your indifference and/or rebellion towards God and Think about how much God has loved you by sending Jesus to save you from the penalty of that rebellion.
Recognise that you need to turn away from ignoring or rebelling against God. The bible calls this ‘Repentance’.
Recognise also that you are lost and need a new start and new directions. Also, Realise that when He died on the cross that it was to take the rap for your wrongdoing and evil.
Accept that He wants to forgive you and make you a child of God and His friend which means that you can have eternal life.
Xercise your belief and thanksgiving for what he has done for you by turning your life over to Him and letting Him give you the directions for finding your way through life. You can simply do this in any form of words that you choose.

Still not sure of what to do or want to know more? Why not contact me using the phone number or email address at the end of this article and I will be glad to talk with you and help you to find the way. Incidentally, I would be happy to give you a free copy of the book of directions that God has given for just such an occasion as this as well. And yes, if like, I’ll even give you a cuppa of my own ‘bush-blend’ tea and some camp oven bread if you want to come around to my place and have a yarn about it. Come to think of it, I think I’ll go and have bit myself right now! So long.