Six vehicles- Alex, TL (Prado), Beatson’s (Patrol), Phillip and Linda (Patrol), Matt (Disco), Ron (Pajero) and the Liney’s (Rodeo), met in Pokolbin, at the starting point. It was cold and raining so we quickly prayed and jumped back in the cars. We also welcomed Simon, our new visitor.

Only minutes into the trip and it started to sleet we all got excited anticipating snow. No chance of dusty roads today as it was a fresh 7° in temp. As we pulled up to air down, we were met with a down pour of sleet, and the scene of an abandoned camp with a pile of wrecked picnic chairs and a burnt-out car covered in bullet holes.

After our first lookout stop the weather cleared and as we continued along the tracks the roads became dry and dusty on top. It was literally four seasons in one day!

We continued along the narrow tracks where the trees were dense, giving the feeling they were crouching in on us. We travelled up the mountain towards another lookout however, the wind was so cold some of us decided to stay in our cars. It was certainly not an appropriate place to set up for lunch.

We turned back and headed towards a grassy camp spot that was more protected from the wind. As Shane was cooking the sausages and everyone was sitting around on their picnic chairs eating their lunches, down came the rain and sleet again. Shane put the awning out on the patrol and Matt put his bat wing out on his Land Rover. Everyone huddled under the cover. By the time we finished eating the sun was splitting through the clouds again giving us the chance to dry up and pack away. 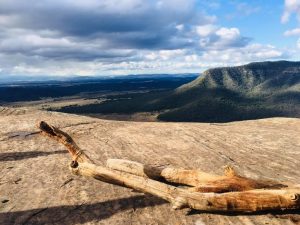 With everyone back in their vehicles we hit the tracks again. About twenty minutes later we came to another lookout. It had a great clearing and views extending for miles and miles across the valley. The timing was perfect as the clouds broke and the sun was shining, providing photographers with a great photo opportunity. Our convoy hit the tracks again and we ventured along through the nice woods to Yellow Rock, which is an ancient site for aboriginal rock carving. Standing atop the massive rock we got to see extensive picturesque sites. It was quite spectacular.
Unfortunately, there was a group of campers right near the site who were playing loud techno music. It spoiled the harmony and serenity of the location, so we decided to have our afternoon tea at another spot further up the track, off the side of the road. Matt and Ron left the convoy at this point. 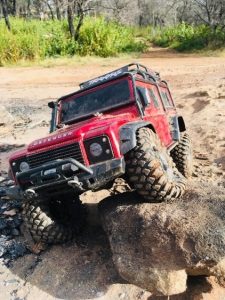 Out of the wind we were able to have a cuppa, afternoon tea and a nice chat. It was now 4:30 pm. The wind settled and the sun was starting to lower in the distance, making it a pleasant drive back to the air up stop point. Here we said our closing prayer, thanked Alex for leading the group and said our goodbyes. It was a beautiful trip.

Written by the Beatson family.