Four men – four ideas.
A story from my younger days when I loved caving (speleology) 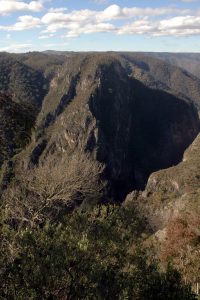 I had always been interested in caving – speleology is the correct term – and I found a couple of other students at the College were also interested so having spoken to a cousin who was in a caving club. We borrowed some helmets and miners’ lamps, packed up the old ute and headed for Bungonia caves not too far out of Marulan near Goulburn. I had read some details of some of the caves there (it was not a public system with lights, guides etc.) and you needed to know where to find the various caves which were scattered around a fairly wide area. The caves are actually at a fairly high elevation and go down quite deep. Some even opening out to the creek some hundreds of metres below. (See pic. at left.
It was a very early start that day and arriving at an early hour we decided that we could probably do two or even three caves in time that we had.
Now for the point of this CROSSTRAX story. Bungonia caves had been open and visited by many people over the years and were quite regularly visited. Indeed, there was one cave there known as the ‘Church’ or ‘Priests’ cave, because a Roman Catholic Priest from Goulburn would sometimes come out with some of his people and hold a service there. He had built what he would have called an altar out of some of the limestone that was lying around, had placed a cross on it and conducted his services of Mass there. He is the first man that this article is about. A devout man who came with his flock to worship God and thank Him for the gift of a Saviour, Jesus. That cave was considered by many as a true worship centre.
The Second man that this article is about decided to do just the opposite of what the Priest was doing. Now I had been to this cave once before and it was in pristine condition. Clean, with stones set out as seats and the cross directly beneath a hole where in the mornings a ray of sunlight would shine through and illuminate it. A credit to its builder. This particular visit the place was just the opposite to what I had seen the time before. Most of the seats had been turned over, pages of the Bible and Prayer book that had been left there for visitors to read had been torn to pieces. But the most depressing thing was that both the horizontal arms of the cross had been broken off…. Now you might say that was just another act of vandalism. No, much more than that. I think that the person who had done this had wanted to celebrate a ‘black’ mass there – a worship of Satan the devil where the Christian cross has the ‘arms’ broken and/or the cross is placed upside down on the ‘altar’. Everything calculated to be the opposite of a Christian service. The devil, not Jesus, worshipped and other acts (not fit to be described in a family magazine) performed.
The first man 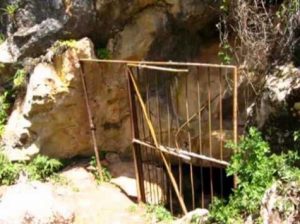 came to worship God in obedience and love. The second man came to defy God and worship the enemy of all things pure and holy in hate and total rebellion. What a contrast! But it didn’t stop there. (We did try to rebuild things in the Church Cave as best we could.) We then went to another cave called ‘The Grill Cave’, so called because grill type gate had been erected at the entrance because at certain times this cave was known to hold a lot of ‘bad air’. (Methane and other gases from decaying vegetable matter than had been washed in over the years.) Now the I knew that the bad air didn’t normally start till a certain cavern a fair way down where we had decided that we would stop and go no further.
It was while we were in that lower section of the cave that as I moved my head around, the light on my helmet picked up what appeared to be a small slip of paper that was poking out from a small crack or crevice. Curious as to what it should be, I reached out and took it, unfolding it as I did so. It was a page from obviously a pornographic magazine. Now I had worked as a concrete packer and labourer for the Sydney Water Board before I went to College because it paid well (danger money for working in deep trenches etc.) and some of the men on that gang would often have illicit (as they were then) photos and illegally imported magazines which they would read and leave lying around. But this single page. well, I thought that I had seen some crook and lewd stuff, but this was something else again! Just one page, but the vilest and crudest stuff imaginable.
W 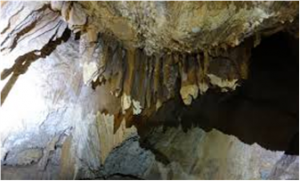 hy was it there? It didn’t take much guessing to work out why. My guess was that this third man thought that he could escape all prying eyes and probably even the gaze of God by taking this pornographic, soul destroying rubbish deep into a cave where he thought that no one could see him and let this stuff fill his eyes and poison his brain. “Ah” he probably thought “down here no one can see me, no one knows….” Perhaps he folded the page then pushed it into the small cleft of the rock intending to come back again some time to ‘perv’ on it further. A third man who thought that he could hide from God.
Now for the fourth man – this, readers is the most unusual part of this recollection. I pocketed the pornographic page intending to burn it at our camp fire that evening. (I did, without showing the vile stuff to the others.) Then just out of an impulse that, at the time I did not realise where it came from, I directed my light around the cave especially looking for similar crevices. There were many as there are in most caves, but then on the other side of this cavern another thing showed up in the bright light of my head lamp.
It seemed to be another slip of paper that had been just wedged into the crevice. Not pushed in tightly to hide it, but almost deliberately left there so that others could find it. It was the work of the fourth man.
The piece of paper was from a pocket note book, and hand written on it were these words…
1 You have searched me, LORD, and you know me.
2 You know when I sit and when I rise; you perceive my thoughts from afar.
3 You discern my going out and my lying down; you are familiar with all my ways.
4 Before a word is on my tongue you, LORD, know it completely. 5 You hem me in behind and before,
and you lay your hand upon me. 6 Such knowledge is too wonderful for me, too lofty for me to attain.
7 Where can I go from your Spirit?
Where can I flee from your presence?
8 If I go up to the heavens, you are there;
if I make my bed in the depths, you are there.
9 If I rise on the wings of the dawn, if I settle on the far side of the sea, 10 even there your hand will guide me, ……
11 If I say, “Surely the darkness will hide me
and the light become night around me,”
12 even the darkness will not be dark to you;
the night will shine like the day,
for darkness is as light to you.
The words are from the Bible, Psalm 139, verses 1 – 12. (Words in Italics my emphasis. NF)

What a contrast! One man, (the third man) comes into the cave thinking that there he can escape the ‘all searching gaze of God’, while another man, (the fourth man) comes in and is overawed by the fact that nowhere is out of the sight of God and that he can know that God is with him even really deep in the depths of a cave.

Some think that they can rebel and oppose God by allying themselves with the enemy. That’s the second man. But that won’t work. God has appointed Jesus who will return as the all-conquering Judge and all enemies will be destroyed.
Some think that they can hide from God and that he will not see either their actions or their thoughts, That’s the third man.
Some realise that you cannot hide from God because he is in every place at every time. That’s a great comfort. That’s the fourth man.
Some realise that God is willing to receive and welcome those who come to Him in repentance and faith and find eternal life in the Saviour, Jesus. That, I hope and pray, was the first man.
More next month