A lonely bush girl and the great cataclysm

A lonely bush girl and the great cataclysm
or,
Looking for Jesus’ return.

When I was a boy, I used to be fascinated by some of the stories that my maternal Grandparents told me about their childhood days out in the Aussie bush, or the ‘back country’ as they called it. Grandfather or ‘Pa’ as we called him grew up in the central west not far from the town of Blayney, did farm work and later became a miner and a prospector in his spare time. Grandmother or ‘Gran’ had spent her early years down in the far south west of NSW living a rather nomadic life. Her father John Jones was a Government surveyor and was employed to survey and lay out places where the government thought that towns should later go.

This story concerns the time when John was surveying the area around Carrathool and Booligal in about 1876 – 82. This whole area was first explored by Europeans in 1817 some 60 years previously, by the NSW Surveyor General and explorer John Oxley. In Booligal today is a memorial to Oxley which is a replica of a theodolite such as my Great Grandfather would have used. 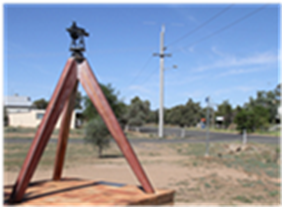 But in 1876 it was still very sparely populated except by some of the local indigenous people… and rabbits! Settlers and selectors were arriving in small numbers and the government decided that there should be towns, laid out in an orderly fashion, roads – properly formed so that settlers might know the boundaries of their properties, and even future railways.

Now Booligal and a nearby property called ‘Hells Gate’ has been satirised by the late ‘Banjo’ Paterson in his poem ‘Hay, Hell and Booligal’. Booligal, then and now is a remote, isolated locality. Paterson’s poem compares Booligal unfavourably with the nearby town of Hay and even Hell, recounting a litany of problems with the town—heat, sand, dust, flies, rabbits, mosquitos, snakes and drought—with humorous intent. “Hell” may also refer to a nearby property called “Hell’s Gate”. The Oxford Literary Guide to Australia places “Hell” at nearby One Tree, on the stock route between Hay on the Murrumbidgee River and Booligal on the Lachlan River. The name ‘Booligal’ is a word comes from a local Nari-nari Aboriginal language and means ‘a windy place’.

So much for the background.

This CROSSTRAX concerns some incidents from the life of my Grandmother (born 1872) when she was a little girl. The family, because of her father’s occupation, was always on the move and so they lived in (and around) a covered dray or wagon. It was a tough life for a little girl. She became the eldest of a number of 4 other children (all brothers) born to John and Caroline Jones.

I remember my grandmother telling me that when she was a little girl (this would have been before 1880) that because the family lived in the wagon and was constantly on the move, that she only had one toy. A little wax doll that had been hand painted, and which she loved dearly. It was her greatest treasure and delight. Like most little girls her dolly was her confidant and she would take all her troubles, sorrows and wishes to her dolly.

One toy! A wax doll. That was where the problems began. The great Hay plain in south western NSW gets very hot in spring, summer and for quite a while in autumn as well. In those days (1870’s) wax was wax and did not have the hardeners in it to make it withstand much heat.

So, every year about mid-spring when the weather was starting to heat up little Lizzie (Elizabeth) had to surrender her precious little friend to her mother to be put away in the bottom of a trunk surrounded by a lot of cloth and clothes in an effort to keep it cool and so as not to melt or have the colours that were painted on it for lips, eyes and other skin tones run and thus spoil the appearance of the face. 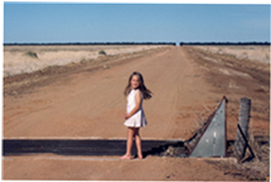 A lonely little girl, whose great friend had to be put away so that it wouldn’t melt, felt totally bereft.

“Mother, can’t I have her for just another week?” were the tearful words. To which would come back her mother’s (probably equally tearful) words,

“No Lizzie, if you want to have your dolly to play with next year, she must be put away now or she will melt in the really hot days ahead.”

Grandmother told me how during the long hot days of a Riverina summer, she would sometimes go and sit near the trunk in the wagon where her precious dolly was stored and tell it all her troubles, secrets and other things that little girls like to talk about. Almost like praying to a God that she couldn’t see but knew was there, and waiting, waiting for the day when she would see her precious possession again.

Yes, as the years went by there were 4 other children (all boys) born to the family and she could play with them. There were also, sometimes some aboriginal children that she got to know but they spoke almost no English and she very little Nari-nari and the cultural difference was enormous so it wasn’t terribly satisfactory. How she wished each year for summer to pass and the days to come when her friend the dolly would come to her again! 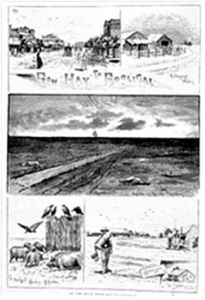 Loneliness and longing for another coming.

Jesus understood our longings for security and friendship you know. He said “I am going away, but it won’t be forever. I will come again. Be ready and keep watching for my return. It will happen and it could be at any time. In the meantime, what I say to you, I say to all, watch and be ready, for the Son of man will come at a time when people will least expect Him.”

In the meantime, we, like little Lizzie can talk to him and bring all our sorrows, troubles and loneliness’ to Him. He is there, but unlike little Lizzie’s dolly that did not have life Jesus lives and is still active in this world. Lizzie knew that her dolly was there – she had seen it put there by her mother. She knew that she would see it again.

But the longing for that day to come! She had trouble, she was lonely and needed a friend, she had so many other needs… So do we. But unlike Lizzie and her dolly, Jesus Is alive. Yes, He died but he rose again and lives. Hundreds were witnesses to these events and were willing to die for what they knew to be true. Little Lizzie could only talk to a man-made dolly, we can talk to a real Saviour – a friend – who is real and like Lizzie’s dolly he will return to claim his people. Lizzie had hope because she saw her precious dolly ‘go’ and knew that one day she would see it again. We can have a similar hope. Many witnesses saw Jesus ‘go’ when he went back to Heaven. But He will return, and when that day comes there will be a cataclysm like never seen before. But those who have turned their lives over to Him will be taken with this time. Not to a dark and cool trunk, but to everlasting joy and glory!
If you don’t know the reality of what I have talked about, why not contact me on 0408 216 401. I’m as close as a phone call and perhaps able to help you with your problems, trouble and loneliness.