Last month we had Old Bob’s version of events,
here’s another version…

There was a good turnout, about 24 people. We had 4 gazebos for shelter on the day which was lucky as we had rain in the morning. So, we were 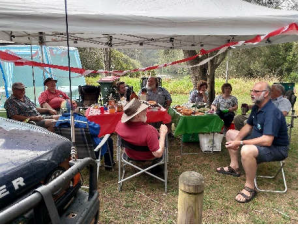 sheltered while we were having morning tea / starters (chips, lollies cherries, nuts and cheese & biscuits) and chatting amongst ourselves.
There was “A Float Craft Paddle Race” and no canoes or kayaks were permitted in the race. The only rule is that your float can last 100m on water without sinking. Phillip was the only contestant, so he won by default. We all thought it would be fun to see how far Phillip’s float would go before sinking but he was saved by the rain. While we were waiting for more people to arrive, we organised an obstacle racetrack and 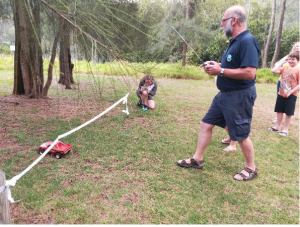 the finish line for the remote-control car race. The three contestants were Phillip, Will and Joel. We walked them through the obstacle track with people placed in various areas, so they knew they had to go around them. Joel was clearly in the lead. Phillip had to kick his car along and Will had to pull out just after crossing the starting line. Joel was the winner of the race. 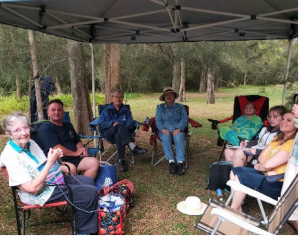 It was time for lunch and all the food was placed on the tables. A few butterflies graced us with their presence in the netted gazebo. I think they were interested in the food. Neil Flower prayed for us before we had lunch. There was ham, chicken, various salads and bread rolls. Everyone that came to the party supplied various foods for our Christmas lunch which was a great help and much appreciated. Then there was a variety of sweets, which included a Christmas pudding  provided by Judith, chocolate mousse cake provided by Dianne. These were delicious. There was also, a fruit slice and fruit platter and to finish off, tea and coffee. 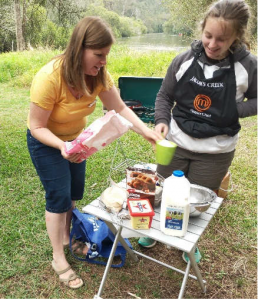 It was time to have a pancake cook off, judged by Olivia Shin. The contestants were Kylie, Olivia, Dianne and Linda. There were many different flavours. To name a few, cheese, chocolate chip, cinnamon & milo and plain cinnamon. All the pancakes were tasted by Olivia and Olivia Beatson was declared the winner. Everyone enjoyed the fruits (pancakes) of their labours. 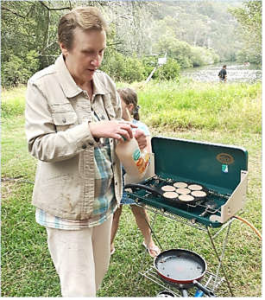 By this stage of the day, we were all feeling satisfied and thankful for the food that we shared together. As some of the people had to leave, we all felt it was time to pack up and say our goodbyes.

Wishing everyone a happy Christmas.