A special ‘mini’ CROSSTRAX
from our old Bush mate,
Bob the Swagman.

Does yers ever wonder if among the thousands of people Jesus fed with a few fish and five loaves of bread, that some may have complained about finding bones in th’ fish or lumps in th’ bread? Or that the Disciples took too long in bringin’ it round t’ the crowd?

Some people seem unable to be happy about anything. There may be truth to the old sayin’ that those who spend their energy being grouchy all day, always barkin’ about something, are likely to be dog-tired at night. 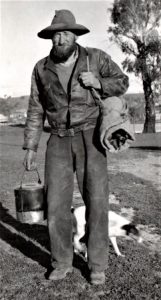 In the Noo Testament, the book of James has a lesson regarding complaints and misuse of our tongues. “How great a forest is set ablaze by a small fire!” he says and then adds “And the tongue is a fire.” (James 3:5-6a) An’ I ‘ve seen some bonzer fire in me time too!
As Christians, we need t’ use our tongues to light the fire of Good Noos rather than fires of discontent or hate.

The old apostle St. Paul believed that God had given him “the ministry of reconciliation.” (2 Cor. 5:18) He said we too have the same ministry to yer know. Let us be reconciled first with God, then with one another and to cap it all off, reach out in Christian love t’ others.