A Father’s Day Special – Read this and determine to be different:

Posted on September 3, 2021 by webmaster

One man’s view
about the things
that really matter….

Stories that may
be strange, yet true,
from the Chaplain’s Travel Log….

A Father’s Day Special – Read this and determine to be different:

15 Tips to Leave a
Lasting Legacy

As fathers, to leave a legacy that lasts, it’s imperative we start out being dependent on God.

For Father’s Day, let’s linger for a little while on what we leave behind us, but remember it’s being written every day.
After 50 years as a Christian – 47 in ministry and 44 in marriage–1 concur with Dr. James Dobson: “There is no area in life where I am to be more dependent on God than in the raising of my family.”
Raising four children and helping now with seven grandchildren, quality decisions we made early enabled us to come to the place where we are today. We do not enjoy perfection but experience God’s faithfulness in this 4th quarter of life. No matter where we’re at on our journey, God guides us and reminds us that He is working “all things together for good to those who love God, to those who are called according to His purpose” (Rom. 8:28).

To leave a legacy that lasts, it’s imperative we start dependent on God, devoted to His Word and develop into the image of biblical manhood. As Bible teacher Ed Cole said, “You’re male by birth but a man by choice.”
Today, families are in crisis. Fatherlessness is epidemic. Along with it is a parallel problem: a crisis in Australian manhood.
On University campuses, we even have classes called “Rethink Masculinity” pushed by leftists and feminists to eradicate what they call “toxic masculinity”. Proponents don’t present a positive alternative of manly virtue focused on faith, family and female protection and love, but rather seek to neuter men until real masculinity is airbrushed away! Gullible young men become men without chests, resembling weak and effeminate pantomime or TV satire characters.
Chuck Swindoll has written, “Masculinity is vanishing. Throughout the western world, fathers have lost their way to true manhood and have thrown responsibility to the wind. Sex roles are blurring, masculine leadership is disappearing, and, like dominoes, homes and marriages are collapsing.”
Dr. James Dobson says, “The Western world stands at a great crossroads in its history. It is my opinion that our very survival as a people will depend on the presence or absence of masculine leadership in millions of homes.”

Men of Steel and Velvet

Amidst today’s cultural counterfeits regarding manhood – macho man, marshmallow man and mixed-up man—God wants real men of ‘steel and velvet’. Our model is Jesus! Strong, yet kind and understanding.
Unfortunately, the person of Jesus in artwork often conjures up images of a poker-faced, wimpy killjoy who never smiled, appearing somewhat emaciated and had chubby little cherubs floating about his haloed head. This meek, mild, milquetoast image of Jesus is a distortion of the Son of God.
Although we aren’t told much about the appearance of Jesus in scripture, there’s evidence He not only embodied character traits of servanthood, meekness, (not weakness), compassion and generosity but physical strength as well.

* Imagine what 20+ years of carpentry work did for His muscular development.

* Visualize Jesus grabbing a whip, overturning tables and driving out money-changers from the temple.

* Think about those “boys on the beach”, burly fishermen dropping their nets to follow Him.

* Use your sanctified imagination to ponder His horrific flogging and enduring the infamous crucifixion depicted so vividly in Mel
Gibson’s film ‘The Passion of the Christ’.

* Think of him walking miles in the blazing sun and then ministering to crowds of thousands, addressing them without any
amplification.

Let us consecrate ourselves to model God’s ideal of authentic Christian manhood this Father’s Day. Then let’s learn in humility from those who have gone before us on pathways of godly, fruitful life.

As a father I knew early on that I had to give my children roots before wings. I also knew that no amount of success at work or in ministry would ever compensate for failure at home. We repeatedly made intentional decisions to reduce our standard of living to improve our quality of life. They’ve paid off with great rewards, so I offer them to you as we celebrate Father’s Day 2021. 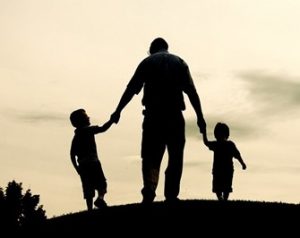 Some Suggestions for Success

Success in marriage and family does not come from good intentions but deliberate decisions based on the Word of God. Contrary to cultural foolishness, God calls us to adhere to scripture.

“For then you will make your way successful, and you will be wise” (Josh. 1:8b).

1. Commit to the practice of prayer for your wife and children daily.

2. Remain in a posture of faith no matter what comes your way.

3. Endeavour to be led by the Spirit in line with the Word of God.

4. Obey God’s Word in everything, being quick to repent for laziness, compromise or disobedience.

8. Celebrate family Scripture reading and study but keep it meaningful, relevant and short!

12. Be intentional with consistent family mealtimes to enhance communication and stay current.
13. Plan individual “date times” and mission trips for your children.

14. Cultivate a culture of honour regarding spouses, grandparents, widows and orphans, plus church and civic leaders.

Here’s the deal: As we witness the decline of the nuclear family in society, God is raising up wonderful examples of what life can be like in the kingdom of God under the benevolent reign of good King Jesus! Fathers and mothers are a team, but we dads should lead the way to excellence, so we leave a legacy that lasts for the glory of God!

Larry Tomczak is a cultural commentator of 46yrs, Intercessors for America board member, best-selling author and a public policy adviser with Liberty Counsel. His new, innovative video/book, BULLSEYE, develops informed influencers in 30 days (see www.bullseyechallenge.com). and he has a variety of resources on his website (see www.larrytomczak.com)